When your state is split into a Lower and Upper Peninsula, what can be done to connect the two? Build a bridge, but not just any bridge, the suspension engineering marvel that is the Mackinac Bridge!

The Mackinac Bridge (aka the “Mighty Mac”, the “Mac”, the “Big Mac”) is currently the third longest suspension bridge in the world and the longest in the Western Hemisphere. It spans the Straits of Mackinac, a full five miles from shore to shore, with the suspension bridge being 8,614 feet long.

Before the bridge was built, the only ways across the Straits of Mackinac were boating or swimming. Swimming was not the chosen option. Ferries were used to carry people, cars and livestock between peninsulas. During Michigan’s hunting season cars might wait 24 plus hours to get a ferry ride.

In 1932, the Mackinac Bridge Authority (MBA) was established to bring a bridge to completion. After many years of financing proposals and setbacks, the bridge opened to traffic on November 1, 1957.

For those that find driving across the bridge a scary endeavor, the MBA provides a courtesy driver at no cost to uneasy travelers.

Mighty Mac Fun Fact: June 1973, an Amish family crossed the bridge in a horse and buggy. It took them an hour to cross and they were the first on record to ever cross the bridge like that. 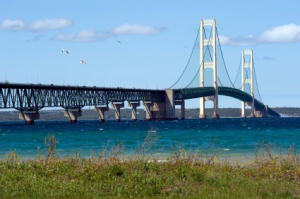 We would love to hear from you! Send any stories, pictures, videos, etc. that show Michigan is Amazing to us at amazingmichigan@yahoo.com